Improving the user experience of socially relevant products and services is becoming increasingly important to scale impact. Gamification is an effective tool for enhancing the customer journey and therefore relevant to the success of consumer-based solutions for pressing global issues.

eLearning platforms for example have been implementing well-designed, playful features where new vocabulary and grammar rules meet quests, reward points, and trophies. Learning a language through an app on a phone has never been easier and more fun whilst motivating participation, engagement, and loyalty to a product. Duolingo, for instance, is the most popular, free online application which has successfully applied gamification to acquiring new language skills. Since its launch in 2011, the platform has attracted over 300 million users worldwide and reports nearly 30 million active monthly users.

At the N3xtcoder MeetUp ‘Gamification 4 Social Impact’, we explored the potential of gamification in generating and scaling donations for climate action. Turning to human psychology can explain why it may be an effective tool to acquire and retain donors.

Why do we play games in the first place?

Humans have an innate play instinct. Long before learning to speak, read, or write, humans played games to fully understand and integrate into their surrounding environment. Playing encourages learning by trial and error and thereby helps develop vital skills such as cooperating, exploring, and following complex rules.

At the MeetUp Jonathan Moore from N3xtcoder explained how our motivation to play tends to emerge from:

The origins of hierarchy are rooted in human evolution theories. In the context of gamification, hierarchy is reflected in game elements, such as leader boards. Mastery comes with the completion of a lesson or a course and the satisfaction of having acquired a new skill. Finally, being rewarded for one’s achievements triggers a dopamine rush and, in turn, engagement and loyalty to a product.

Gamification works because it touches ground on fundamental human desires. However, as Jonathan stressed, gamification needs to be ethically tenable to not exploit these needs in the name of profit. Hence, gamification tools should always be chosen with care, build on habits not addictions, and help users achieve their objectives in a nurturing, creative, and enjoyable manner. 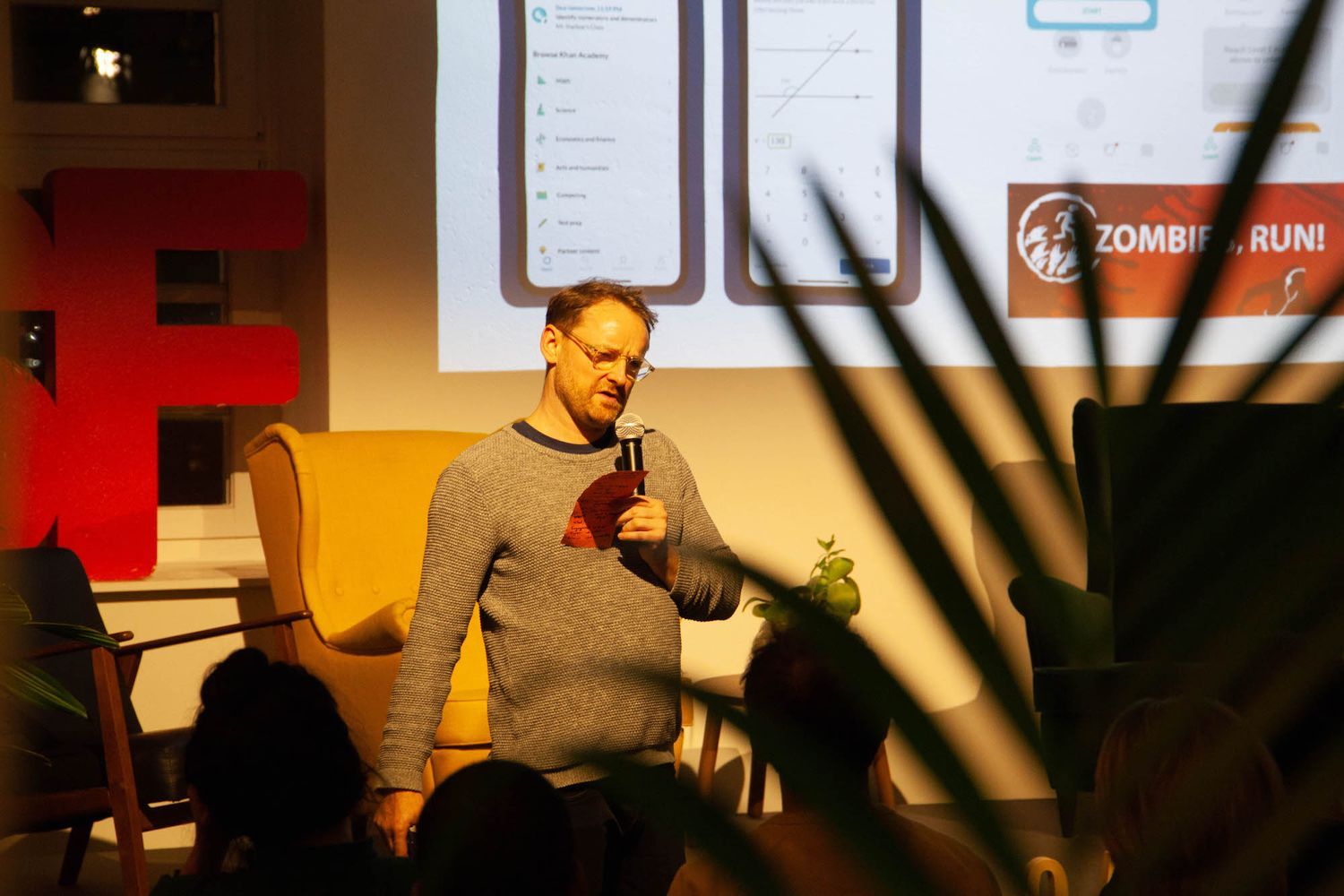 The aim of the MeetUp was to explore possibilities of game elements in charity. Betterplace, a non-profit donation platform with over 30.000 projects, has already integrated playful features into a number of donation possibilities. Tournaments, progress bars and goals, storytelling, and charity streams have shown to draw attention and increase donations.

Currently, Betterplace is in the process of developing a new product: ‘Treeflix’ - a subscription for planting trees. To win and retain subscribers, the company is looking to gamify the donation process.

“We believe that everyone can fight against climate change – by sustainably supporting global forestation. Tree by tree, collectively. We want to transform the way to give, with a monthly subscription for trees anywhere.” 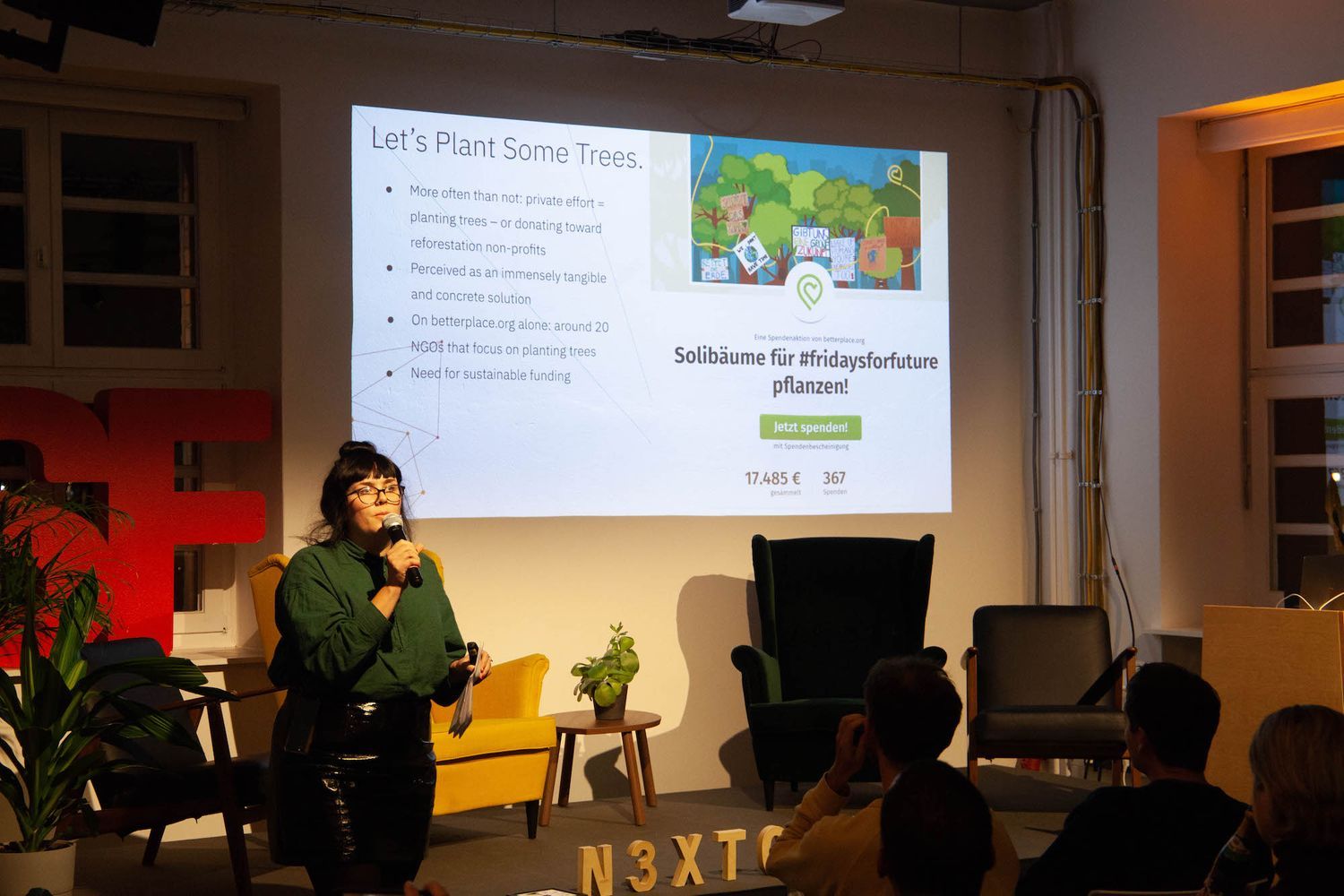 On betterplace.org, around 20 NGOs that focus on planting trees are listed, which require sustainable funding. One-time donations help, but they sure don’t plant an entire forest. The platform offers a pool of trusted non-profits and a digital infrastructure for donating. At the N3xtcoder MeetUp, we split up into four groups, brainstorming ideas on how and where to integrate game elements into ‘Treeflix’ to make a permanent donation fun and worthwhile (without undermining the underlying purpose of supporting SDG 13 - Climate Action).

Team 1 suggested a mobile app in which a donor can track his or her number of trees planted and the correlating CO2 reduction. Additionally, their Treeflix app would pose individual and community challenges, doubling up the impact. A challenge could be ‘one-week vegan’ or ’500.000 steps in a day’ as a community effort. The latter can simply be implemented by connecting the app to Google Fit for example. Lastly, through leader boards of ‘number of trees planted’ and ‘CO2 prevention’, users and communities can compete and cooperate with one another.

Team 2 presented a subscription model with packages from ‘s’ for people on a budget to ‘xl’ for high earners. In turn, donors could download an app which would allow users to engage with an array of environmental metrics, such as being able to calculate their carbon footprint, receive tips and tricks for a sustainable lifestyle, track trees planted through a virtual forest and its implied CO2 reduction, as well as converse with a virtual tree via a chatbot. They also thought of catchy names and slogans including ‘Chat with A Tree’ and ‘Treeflix n’ Chill’.

Team 3 laid out an elaborate and detailed concept. On a mobile app, Treeflix subscribers would be able to join a tree-tribe of their choice or found a new one and decide on a specific landscape e.g. tropics, alps, or meadows. Every month, users would receive a notification to pick a virtual tree that fits the landscape and plant it in a spot of their choice. To grow the tribe, users could invite friends and colleagues to join. Individual and community leader boards would allow users and tribes to compete. Rewards would be granted based on length of subscription and number of trees planted. Shaping the landscape would be a community effort and rewarded with for example the ability to unlock a new part of the landscape; individual rewards could include unlocking a new type of tree. In case a user wanted to cancel his or her subscription, he or she would have the opportunity to find a friend or colleague to adopt the planted trees.

Team 4 had a similar idea. However, instead of tribes, they imagined actual cities competing with each other. On the mobile app, users could track how many trees each city has already planted and contribute to their current hometown leaderboard score. Inviting a friend would be rewarded, and community challenges would help to scale the impact of each city.

All four teams suggested leaderboards, community challenges, and the possibility to track one’s actual impact. Thereby, Treeflix would not only enable users to contribute to climate action on a monthly basis but the gamified subscription model could also encourage community effort and spread awareness.

Tying it back to where this article began, improving user experience for socially and ecologically relevant products and services carries the potential to scale impact and can therefore be perceived as an important step to tackling global challenges.

P.S.: We will keep you up to date on the development of Treeflix!